Even though customer service has become an omnichannel experience, 61% of the callers still prefer the good old fashioned phone call to have their queries and grievances addressed. That’s when they interact with your IVR (Interactive Voice Response) systems.

The standard IVR was a promising proposition for both users and businesses when it was first introduced. It sustained as a preferred mode to route callers to dedicated queues or to handle queries in cases where conversations are not required.

Today, tech innovations have raised the bar for customers’ expectations. When tech solutions such as smart voice assistants are functional tools rather than a fascinating novelty, legacy call center systems no longer make the cut. It is for this reason that 35% of consumers seek a better alternative to the inferior customer experience offered by standard IVRs.

Before we dive into the specifics of this new technology, let’s look back into the origins and development of IVR technology to fully comprehend its purpose, capabilities, and limitations.

The history and journey of IVR

The IVR systems have been around for nearly five decades now. The technology’s commercial application was rolled out in 1973 for an inventory control system. But seeds for it were sown with the creation of the Voder in 1930. Over the years, this technology has come a long way from humans working to make a machine ‘talk’ to highly intelligent automated voice response systems.

In its nascent form, IVRs were a touch-tone input and voice output systems. In these, pre-recorded messages prompted callers to put in their requestinput by pressing keys on a phone. This technology was considered a game-changer when it was first rolled out and widely deployed by businesses across industry verticals. However, the large menus, numerous options, and using the same handset to key in inputs and listen to the voice prompts made the experience cumbersome.

Many of these problems posed by first-generation IVRs were resolved by speech input and output systems, which used automated speech recognition to respond either via pre-recorded messages or dynamic messages generated with the help of synthesized speech. Functionalities such as call routing and error-addressing dialogues further streamlined the system by making navigating menu trees less confusing.

Latency (processing time) and word error rate (detection errors) are the main reasons why back in the days traditional IVR systems were not able to have a live conversation with callers. Real-Time ASR now improves and enables building such systems.

The data hooks integrated into the back-end allowed IVRs to process simple customer service tasks independently. If human intervention was necessary to address a query or issue, computer telephony integration (CTI) allowed agents to review the IVR activity and pick up a conversation mid-way without the caller having to repeat themselves, but also without having direct access to what the caller was querying about. The agent only had access to the IVR dial tone menu structure.

This was seen as a big step for the self-service model that the IVR system was designed to push forward. Consequent advancements made the IVR system capable of communicating with consumers proactively.

What is conversational IVR?

Conversational IVR systems use voice commands from callers, allowing them to engage with a self-service model when they reach out to a business for assistance. These systems are smart and intuitive enough to understand the context and content of a conversation. This is a giant leap forward in obliterating tedious hierarchical menus from communication experiences.

Powered by AI, Natural Language Understanding (NLU), and machine learning, conversational IVR systems allow callers to steer the conversation, with automated systems reposing in complete sentences. This makes the conversation flow more naturally without any human intervention. Since it uses machine learning in tandem with AI, this IVR system can capture the exact phrases and sentences used by callers’, offering businesses a goldmine of insights into what their callers seek in their self-service journey toward issue redressal.

Conversational IVR, as a system, is also capable of improving its proficiency based on the inputs it receives. When conversational IVR cannot comprehend what a caller is saying, an agent can take over seamlessly. The AI system then stores the inputs for conversational analysis and optimization so that when a similar question or query is posed in the future, it can handle it without human intervention.

As the data and knowledge build-up, the IVR becomes better equipped to handle calls independently. Besides, the use of NLU enables IVR systems to become more and more conversational. This allows a shift from ‘this is what I can do for you’ to ‘what can I do for you’.

Together, these elements pave the way for callers to take charge of their interaction with a support system, thus, improving their experience. For businesses, this also results in more seamless call routing processes, greater reliance on self-service, and reduction of internal transfer costs.

In short, conversational IVR, with the help of AI, can address the core demands of callers, value their time, understand them, and engage them.

How is conversational IVR different from standard IVR? 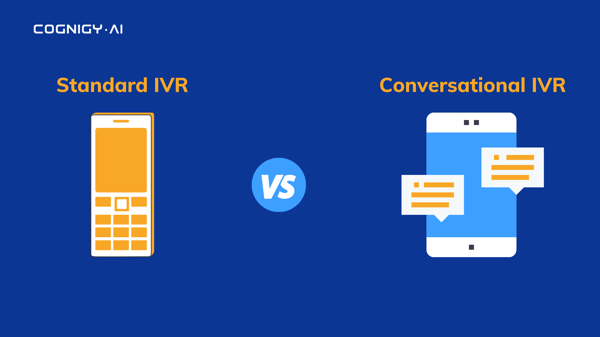 While the speech recognition technology in standard IVR systems was limited to processing simple ‘yes’ and ‘no’ commands, conversational IVR is capable of handling more complex communication with people in complete sentences, using its NLU capabilities. A caller can describe their concerns or queries in detail. The conversational IVR system can, in turn, offer responses closely replicating a human-like interaction. This helps improve the caller experience manifold.

Another limitation of standard IVR systems was that they depended on number inputs from the callers. As a result, they had limited ability to adapt as per the caller’s response. For instance, if someone presses a wrong number while making an input, they would’ve had no choice but to return to the main menu and start over. In short, traditional IVR systems offered a less personalized experience owing to their limited functionalities.

In contrast, conversational IVRs facilitate a more free-flowing caller service experience, since it is not bound by a pre-set menu script. This makes these new-gen IVR systems better equipped for steering a caller in the right direction within a self-service model. The need for live agent interventions continues to be on the down-low.

This not only improves the satisfaction of callers but also improves the productivity of agents while helping to cut back on overall costs.

A monotonous, recurrent voice – as seen in standard IVR systems – that speaks to the callers without understanding the intent or context of the conversation is no longer good enough.

Some of the top benefits that conversational IVR brings to your customer-support initiatives include:

According to an IBM report, companies across the world spend more than $1.3 trillion to address 256 billion calls from their customers each year. This translates to an average of $30 being spent for every call a live agent addresses, excluding the cost of hiring new employees to maintain a customer support team that is capable of handling your call volume. With automated and highly intelligent conversational IVR, this cost can be reduced by 1/8 times.

This futuristic IVR system also cuts back on the time taken to address every caller, which means it can handle more calls as compared to standard IVR in the given timeframe. A conversational IVR system can resolve 66% of requests faster than live agents. And it does so with far greater consistency.

The biggest advantage of conversational IVR is its ability to deliver on enhanced caller experience. Callers seek human communication to address pressing and urgent issues. When the journey to a human interaction involves navigating a maze of options and channels, it can make callers frustrated quickly. The fact that 60% of callers bypass pre-recorded messages in standard IVR systems to reach a human voice speaks to the fact that the experience is far from satisfactory.

On the other hand, conversation IVR can not only handle a bulk of caller requests independently but also routes them to a live agent seamlessly.

In addition to building upon the benefits of standard IVR, conversational IVR also streamlines the issue of scalability. For any business operating in a multilingual market, it is imperative to have a support system where callers can converse in their native language. However, hiring separate agents proficient in different languages can prove to be financially unviable.

With AI and NLU powered capability to learn and adapt, conversational IVR systems can be configured to handle calls in different languages. As a result, you get the benefit of scalability and reduced operational costs rolled into one.

Conversational IVR systems have an extremely quick response time. This means that callers’ commands and requests are processed and routed to the right department in the shortest time possible. Besides, unlike human agents, the behavior of these systems is not influenced by their surroundings and circumstances. This consistent and speedy support system helps to improve the brand image of businesses that care about their customers.

This is important as getting customer service right can contribute significantly to the bottom line. A survey reveals that 7 out of 10 buyers in the US readily spend more with businesses that offer great support services.

Which IVR should you choose?

To sum it up, conversational IVR is your answer to improving your caller support services through futuristic technologies such as AI, NLU, and machine learning. Conversational IVR system offers your callers human-like responses to their inquiries rather than making them feel trapped in a jigsaw of menu trees. Through real-time caller self-service, data insights, and intelligence capabilities, these systems can lower cost, reduce caller churn, and improve caller satisfaction.

Are you considering making a shift from Standard IVR to Conversational IVR but do not know where to begin? Check our Contact Center Automation Guide to dive deep into the topic.

The Next Chapter in Customer Service Automation

Why an AI-Powered Contact Center Will Never Replace Human Agents